Nathaniel Styer was working from home earlier this week when he noticed an unusual scene outside his apartment window.

An intense burst of wind and heavy snowfall brought on by the polar vortex, known as a “snow squall,” started blanketing his Brooklyn neighborhood in white.

And it seemed he wasn’t the only one who wanted to be inside. 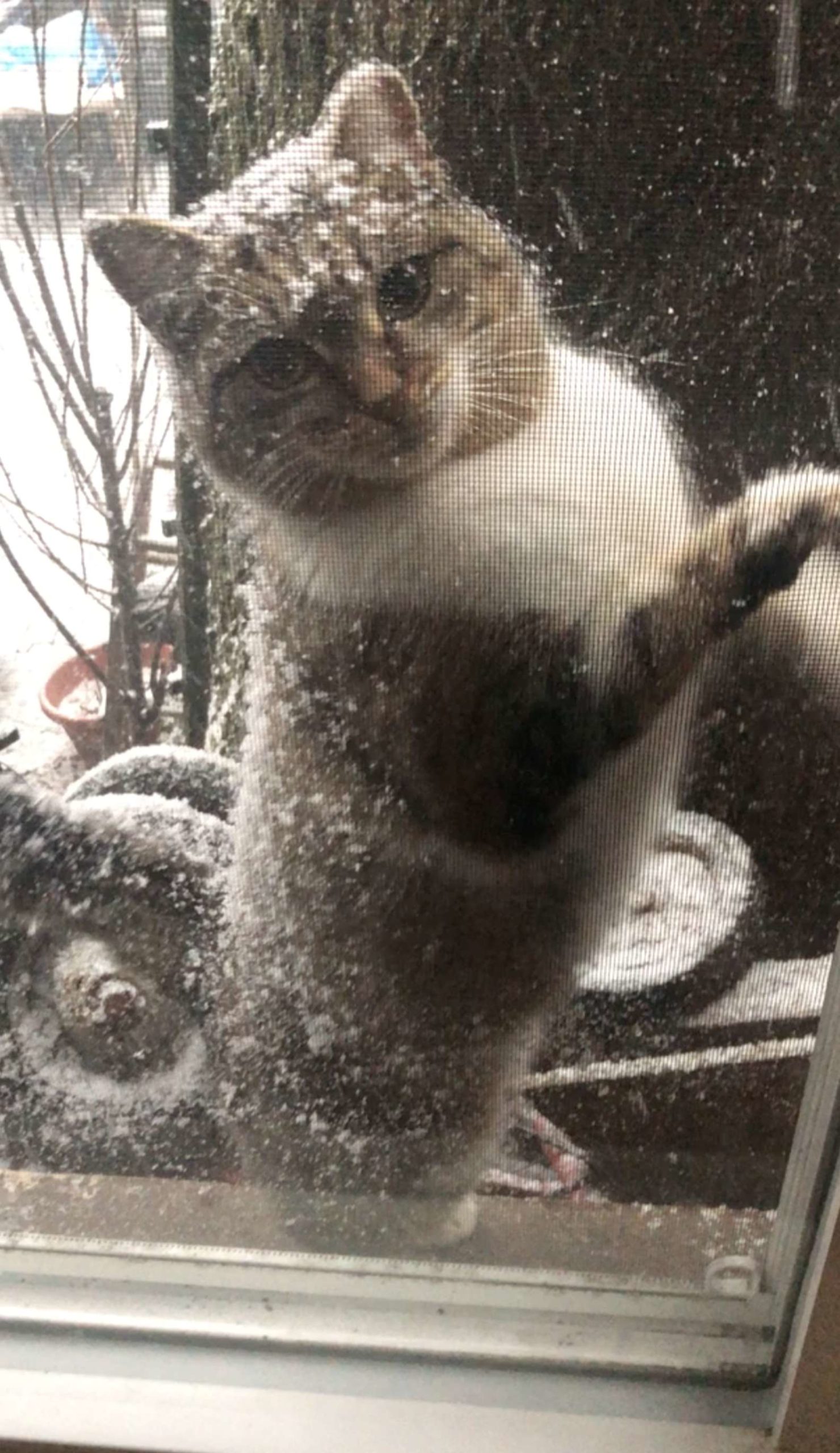 A tabby cat had hopped up on the window ledge and was scratching and rubbing against the screen. “She was 100 percent asking to be let in,” Styer told The Dodo.

He recognized the cat as Chunk Chunk, one of the members of a nearby stray cat colony. Styer knew Chunk Chunk was experiencing a moment of crisis — and he had to act.

“I’ve never seen her react this way before,” Styer said. “It was clear that she didn’t know what to do in the storm.”

Styer is not the biggest fan of the strays that roam his neighborhood, but his fiancée Renee Becerra devotes her time to the colony and keeping its members healthy. Chunk Chunk had appeared sometime in the fall, making her one of the colony’s newer members, and seemed unprepared to brave the weather.

“I’ve always been pretty reticent about bringing the cats inside, but I knew Renee would really want me to help Chunk Chunk out,” he explained. “I love Renee and I knew helping Chunk Chunk was the right thing to do.”

Styer opened the window and let Chunk Chunk in from the cold. But once the cat was safe and warm, she wasn’t quite sure what to do.

“She allowed me to pick her up, which is unusual for our community cats,” Styer said. “When I set her down, she instantly ran around the house and tried to run out through another window. She learned it was closed when she ran into it.” 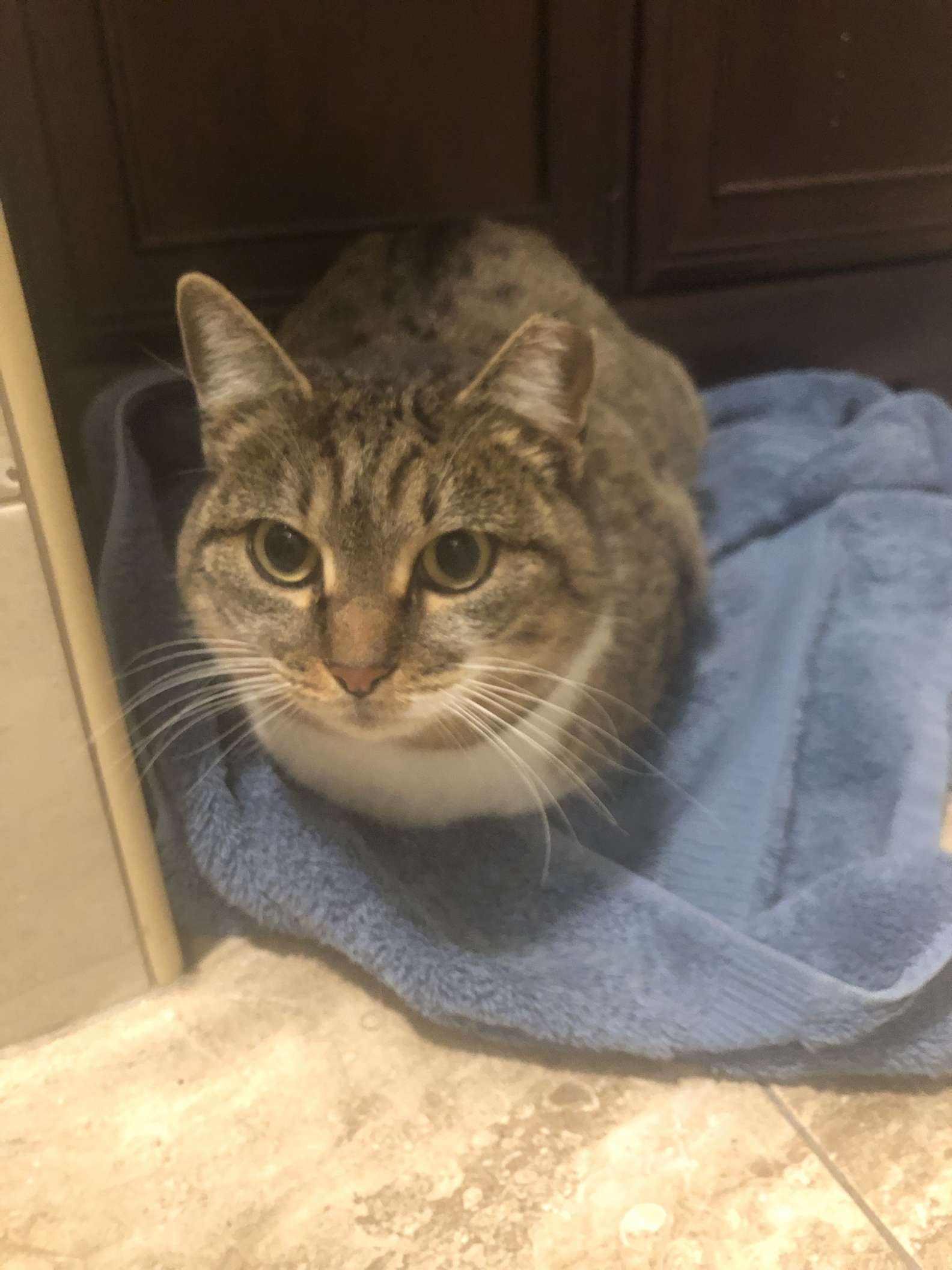 Styer placed Chunk Chunk in the bathroom, away from their dog, and eventually she settled down. When Becerra got home, she wasn’t entirely surprised when she learned the identity of their house guest.

“From the first time she appeared at our window, she’s been one of the friendliest community cats that I’ve ever come across,” Becerra told The Dodo. “She’s always asking for pets and starts purring within seconds.” 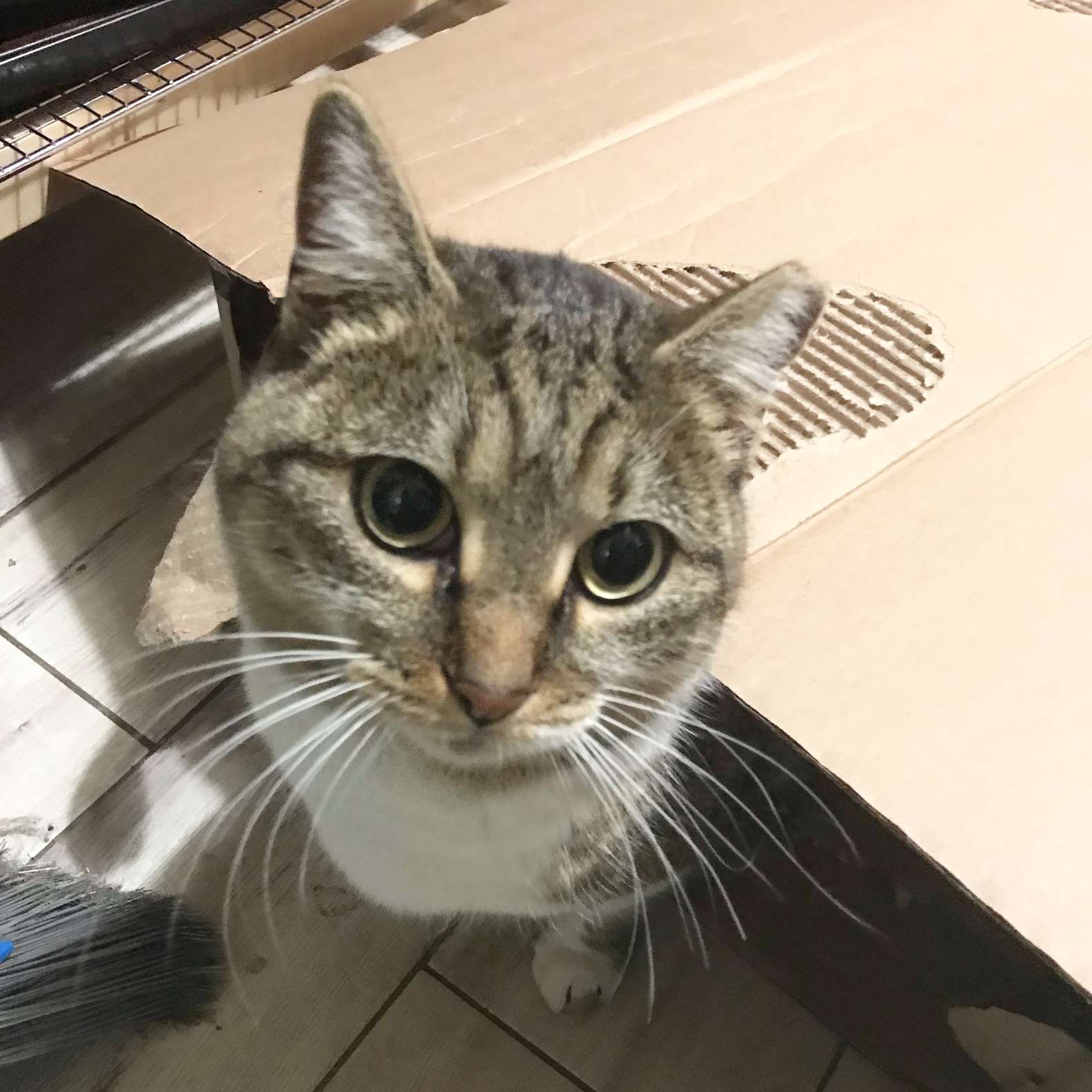 Since moving to their apartment two years ago, the couple has helped several litters of stray kittens find forever homes, and when the spring comes, Becerra plans to trap as many adults as she can in order to neuter and release them. Luckily, Chunk Chunk has a notch in her ear, a sign that she has already been spayed. 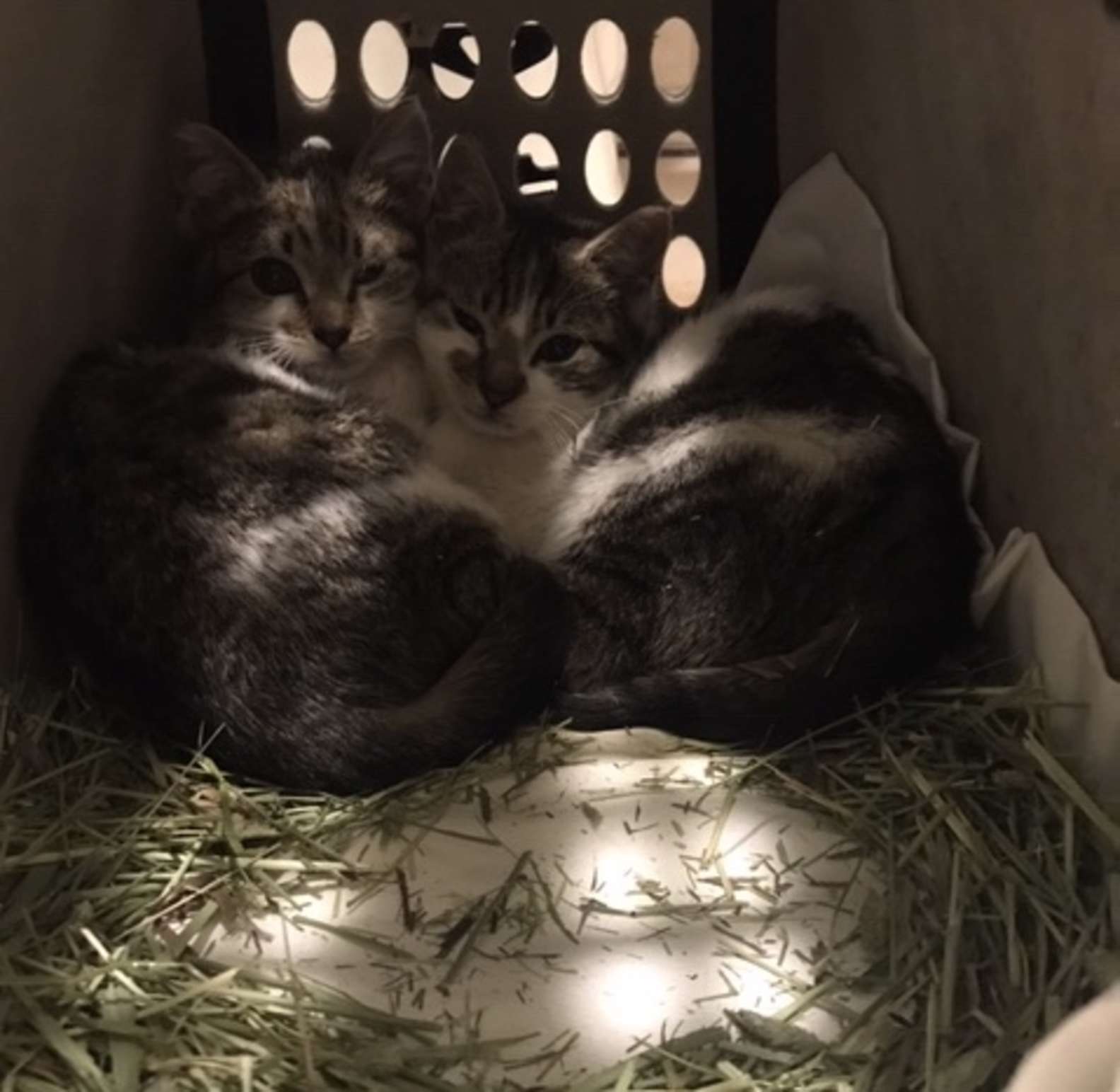 Becerra has been trying to help the community cats through the cold spell and encourages others to do the same.

“Winter is the hardest time of year [for these cats],” Becerra said. “I’ve built three winter shelters and regularly provide food. Winter shelters can be bought from some cat rescues but they’re also really easy to make … If you have the space or a safe quiet spot in your neighborhood, I would definitely recommend putting some out.” 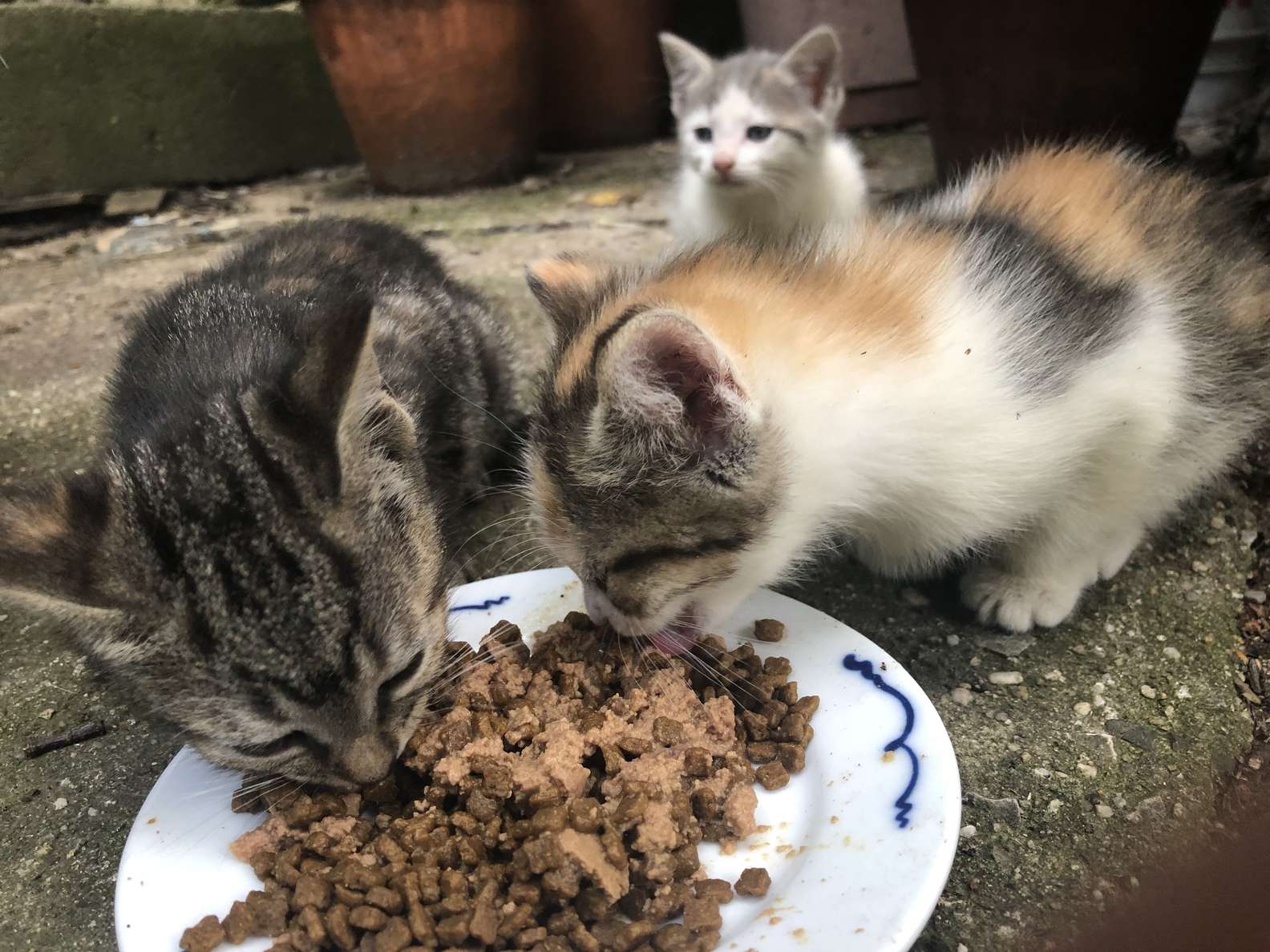 As for Chunk Chunk, it’s unlikely that the sweet cat will ever have to brave another chilly New York day ever again.

“We’re still figuring out what’s next for Chunk Chunk, but in the meantime, she’ll be staying with us,” Becerra said. “Chunk Chunk seems to be more suited for life indoors versus outdoors, so I’ll be reaching out to our contacts at the ASPCA to see if they can assist me in finding her a home.”