Everyone should have heard the slogan “adopt, don’t shop” by now. There are a lot of animals in shelters who need love, care, and a decent home. Some of these unfortunate creatures have been abused and even abandoned. Whether it’s because the animals are unwell, aren’t a good fit for the home, or the people are plain bad.

Regardless, there are many heartbreaking stories that emerge from animal shelters. There are, however, some joyful ones. Despite a tragic beginning for this adorable white kitty, this story has a happy conclusion as employees became inventive in order to give this cat the life it deserves.

Let me introduce you to Champas.
In 2015, he arrived at an Animal Welfare League shelter in Australia. Champas was a timid youngster who avoided eye contact and hid in the shadows.

Staff at the shelter decided to socialize Champas further by assigning him the role of “feline receptionist” in order to enhance his prospects of adoption.

Champas began to meet more people and became considerably friendlier as a result. When shelter employees realized he was ready to be adopted, they launched an adorable ad campaign. 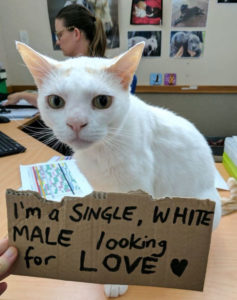 They made him a dating profile! 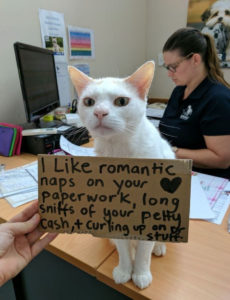 He has a lot of job experience. 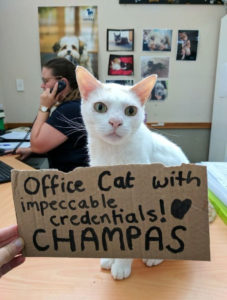 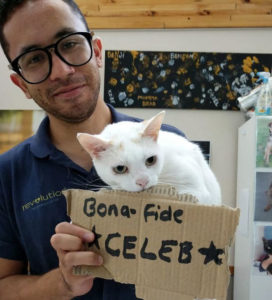 Champas even got into the holiday mood. 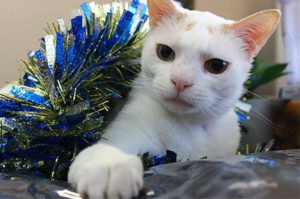 Champas was adopted after 436 days at the shelter!
Nathan, his new parent, stated:

“To everyone who is wondering what happened to Champas, the long-term inhabitant of Kemps Creek, he came home with me today and went right to sleep after biting my hand,” 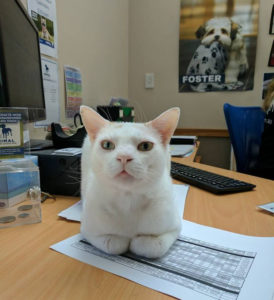 They had a happy ever after!